Life has changed dramatically. And, all for the better. It is no wonder why I haven’t had time to update my site. Julia and I are engaged. We are getting married April 10th. And, we are moving from the Athens, Ohio area to Middletown, Ohio to work for her Dad.

We will also be doing some traveling this year, kind of an extended honeymoon. In May we’ll be heading out on a road trip to Washington State. Mainly we are going back to Vashon Island, to work at Sun Island Farm for a bit. Probably heading on a southern route going out and a northern route on the way back to Ohio.

So what is this Kanji Cabin? It is where Julia and I have been living since early November, 2010. (And where we are moving out of in less than two weeks.) If you are on Facebook, lame as it may be, you probably saw me post photos from time to time from the Kanji. Or, if you are a contact on Flickr, you may have seen some there as well. What I wanted to do is document the place, because we like it so much. And, a big part of me wants to try and replicate large parts of the cabin some day. 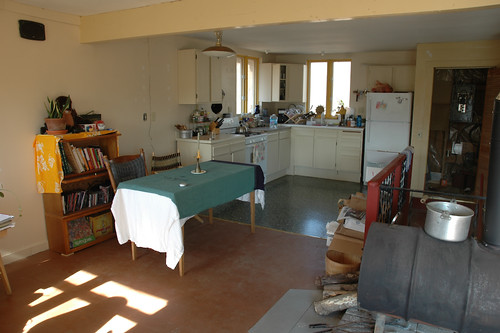 The Kanji Cabin has been absolutely great! We both love it, even in it’s half-dilapidated, shoddily-constructed state. The space is nice – a great size. Not too big. Just big enough for us at this stage in our lives. It’s well insulated and easy to heat. It is very cozy. When we first moved in, it didn’t have electric utility power. We used two Trojan batteries and an inverter for a while. Then AEP Ohio came and put up a pole and a transformer, we’ve had full grid-power since early January, and that changed things a lot.

There is just so much about the place that works. The floor plan is very open and L-shaped. It is perfectly situated for passive solar – when it is sunny outside, in the winter, you don’t even need a fire. It has great exposure and warms right up. We like the size and layout of the kitchen. More counter space would be nice, but every kitchen I’ve ever been in that was the case. There’s a few details on the inside I absolutely hate, but are totally avoidable crap-construction related and wouldn’t be in any structure I’d ever build or have built. I like the windows. The size of the rooms is nice. At it’s most basic, I like the cabin. But there are many unfinished aspects like the floor needs to be finished – there is just plywood sub-flooring. I like the metal roof, but soffits are completely open, inviting critters to nest in the insulation. The cistern isn’t anywhere near big enough, and there are other half-through through details like that. The worst part is the guy who built it had this ridiculous driveway put in – and the steepest part is on the north slope of the hill (it warms up and melts last). Even if it is dry, though, you need a four-wheel-drive to get up it. It is that steep! I will say that he probably did the best he could. The hill is very steep in all directions. He didn’t have many options.

But I like the ideas here. We catch rainwater. Which makes an incredible amount of sense to me. We burn wood for heat and live in the middle of a great forest. The house is well insulated and reasonably efficient, etc… If it wasn’t so woodsy, it would be perfect for solar electric and hot water (a well placed chainsaw would take care of the shading and provide more firewood).

Undoubtedly the best and arguably worst things about the cabin is the location. It is on the top of a hill, surrounded by trees – mostly larger oaks. It is situated on the south-side of the hill, partially embedded into the hill. The cabin has two stories – so there is a downstairs ground-level entry and an upstairs ground-level entry. The bad part is it is easily 100 feet up this fairly steep hill from the road. There is a parking landing about 1/3 of the way up the hill. Then there are steps. It is a bit of a hike from the car up to the house. If the driveway is iced up or sloppy from lots of rain or snow melt, we get to hoof it even farther because we can’t make it to the landing. There is no doubt it sucks to not be able to drive right up to the house.

However, the cabin has this amazing view. And this deck off the second floor. Wow. The deck is the best thing about this place. Unfortunately we’ve been here all winter, so we really haven’t “hung out” on the deck much, but we got out there now and then. 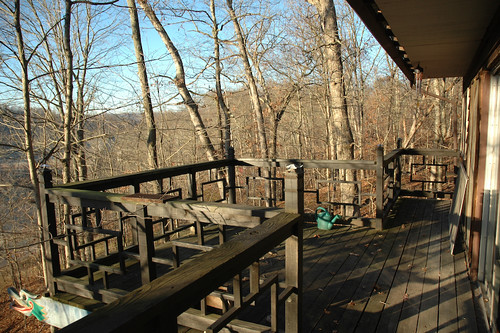 But the view to the south out of the windows standing anywhere inside is just awesome. From the main floor, on the south side of the cabin, there’s a good 15 foot drop to the ground. Meaning the deck is hovering a good bit off the ground on that south side. So, you are in the trees. And, the view out – all you see is mid-way up these beautiful oak trees. It’s like the cabin is floating in the forest.

Anyway … I just wanted to get started on this post – I’ll work more on it later.